The Importance of Configuration Files

Description of the Configuration Files

Setup of the Emulation of Supported Peripherals

Using an empty file fd0disabled.cfg we can prohibit the emulated disk drive fd0([A]:), even though the file fd0.cfg exists with correct path to the folder with the floppy disk image. 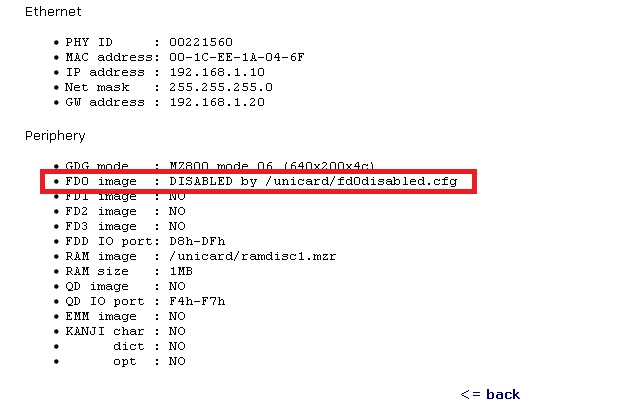 When displaying the Unicard parameters using a http server, we can see the status of disk drive fd0.

If it exists and contains a path and a name of an existing file with a Quick disk image, this image is mounted into the emulated QD drive. If the file does not exist, the QD drive wil not be emulated. The current firmware version also emulates recording.

Quick disk can also be used in BASIC:

After running the game from Quick disk, the first part of the game Flappy-A.mzq will start.

After being asked to insert another Quick disk and waiting for 3 seconds for the QD motor to switch off, the second image of the Quick disk Flappy-B.mzq is mounted.

Now you can confirm that the second Quick disk Flappy-B.mzq has been inserted and the game will run. 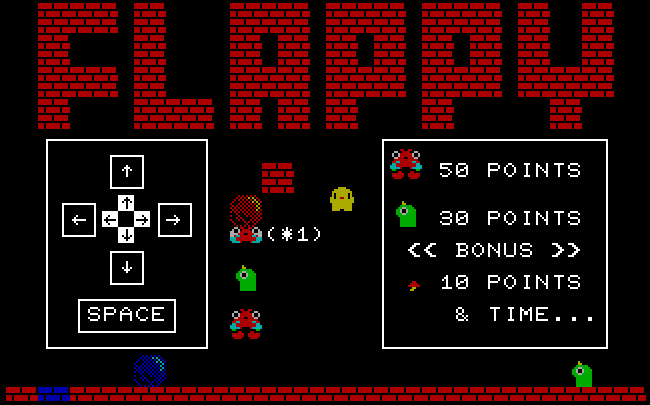 If the Quick disk images are named correctly, it is possible to run programs and games even on multiple Quick disks.

If it exists and contains a path and a name of an existing file with the RAM (SROM/SRAM) disk image, the emulation is working. Unicard supports emulation on files of these sizes: 64k,128k,256k,512k,1M,2M,4M,8M,16M. If the file's image is smaller than 64kb, the Unicard will stop emulating.

RAM disk can also be used in BASIC:

EMM disk can also be used in BASIC:

Configuration of the communication interface

Contains in text form the settings of the parameters used to configure the network for accessing the HTTP Server, the pre-set values are mentioned in brackets:

The network parameters can be reviewed through HTTP Server interface or USARTShell interface, using the program UniUSARTShell. DHCP is not supported.

Configuration of the file network.cfg

If it exists in file location /unicard/ushelldisabled.cfg, then USB is available for SHARP as emulated SIO channel B ports 0xB0-0xB3, if not, the communication interface USARTShell is running.

The configuratuin file containing the path to MZF, which is run by MZFLoader - usually contains path and a name of the file with the Unicard Manager. MZFloader is generally run from an emulated SRAM disk or Quick disk. Unicard will, after a reset, temporarily set up on the computer its own SRAM disk with the MZFloader, which is then downloaded and run. MZFloader will then search the mzfloader.cfg file and run a program mentioned in it (usually the Unicard manager). Only then will it set up the RAM (SRAM) disk according to the contents of the appropriate configuration file. This function works relatively well on MZ-1500, but is not completely reliable on MZ-800. Sometimes it can help to enter the monitor using the M key (or M+Reset) and to run MZFloader from the SRAM disk using the command EB. If you do not need to actively use the RAM disk, you can put mzfloader.ram in it directly, which works better, but watch out for overwriting the RAM disk by, for example, running BASIC or CP/M. If you do not need to actively use Quick disk, it is best to start the MZFloader from it - copy mzfloader.mzq into the QD device. Running MZFloader from QD is reliable on all platforms. If all you need is to run MZF programs and games, it is the recommended solution for now. At the same time, if you have a floppy disk mounted in of the virtual drives, use Q+Reset to directly load QD instead of running FD, which otherwise has higher priority.

Configuring the configuration file for Sharp MZ-800 and UniManager mgr800.mzf

Configuring the configuration file for Sharp MZ-1500 and UniManager mgr1500.mzf

The existence of this file turns on PS/2 mouse emulation on port 0x71. Normally, programs with mouse support use the second JoyPort on port 0xF1. Because it is impossible to turn it off and a Unicard emulation would interfere with it, the Unicard emulation is moved to port 0x71. If you want to use this emulation, you have to have the default port modified to the emulated one for programs and games.

Unicard also emulates peripherals that do not need configuration and are not activated by the contents of or the existence of a CFG file. These are peripherals, whose emulation is activated by the presence of binary ROM images in the \unicard\ folder

If we copy file mz1r24.rom, containing a binary ROM image of a dictionary card MZ-1R24 into the \unicard\ folder, the Unicard will emulate it on ports 0xB8-0xB9, same as with MZ-1R23.

As of 08/2018, the Unicard emulates 3 types of math coprocessors. AM9511(I8231,CI8231..), AM9512(I8232,CI8232..) and a coprocessor for calculations in SHARP BASIC numerical representation internally called SHARP ALU. When a command is entered, ALU will activate bit BUSY, which returns to zero after it is finished. The data reading routine therefore has to wait for ALU to not be BUSY. It is not necessary to block wait or anytihng like that. The communication and supported math functions and operations are similar for all types of coprocessors.

BASIC is modified to calculate these function through SHARP ALU:


Modified BASIC and examples of ALU use.

The Unicard takes in all the communication with GDG and a video memory and emululates a graphics output, which outputs to VGA in full resolution. 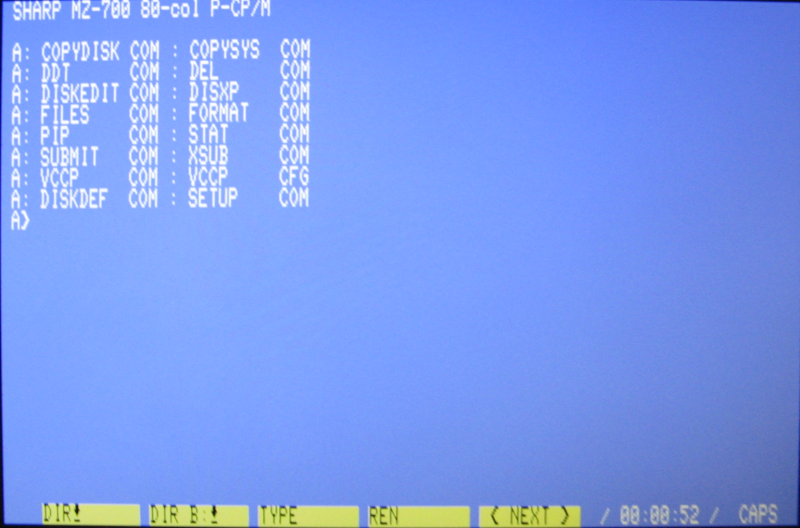 On Unicard VGA output MZ-700, there is an emulated SUC modification, so an 80 column mode works. 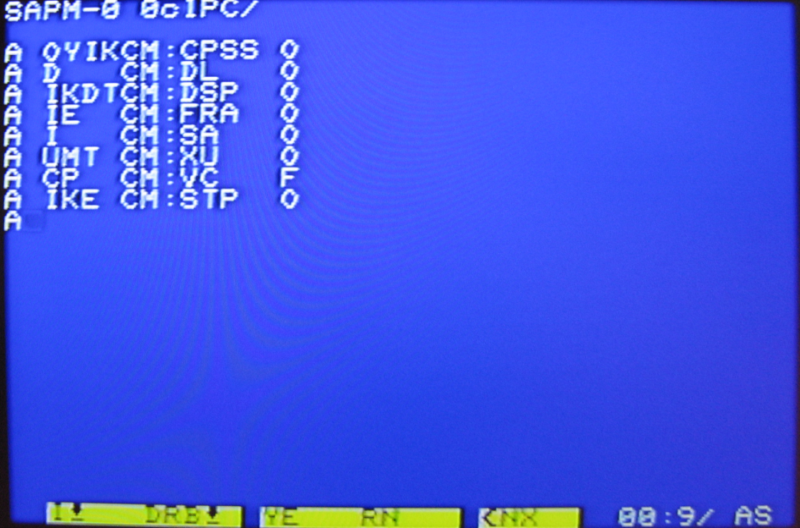 Using MZ-700 without the SUC hardware modification, you will see through the composite output the default 40 column mode and in it every other character, because the emulation of a SUC modification is only functional on a Unicard VGA output.

The Unicard contains a real time clock maintained by a battery. If you do not need or want the clock, you do not have to install the battery. The clock is used by the Unicard file system when creating or modifying files and are controllable through MZFrepo interface. This can then be used by some applications. For example, UNIUTIL can read the time from the Unicard and set it into CP/M. It is best done automatically when starting CP/M.

Emulating sound on the audio output, mono output is split into stereo. Currently, only PSG output is emulated, and not i8253, the output is line only, it will not handle headphones. SV2 jumpers switch the connection of two pins of the four point jack on Samsung × Apple standard - the ground is either closest to the cable or second closest, and the input is the other one, for a three pole connector it should not matter, the ground is over both of them.